As of July, 2021, the Entomological Society of America no longer recognizes the common name gypsy moth for Lymantria dispar. Our website will be updated with the new common name after it is selected. 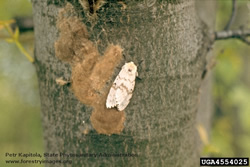 The gypsy moth was introduced around Boston over a hundred years ago and has since been headed south and west. The gypsy moth is present in North Carolina but not currently well established. Portions of Currituck and Dare counties are in quarantine for this insect. The majority of the infestation is currently contained at the Virginia state line, with a large portion of Virginia state-line counties in quarantine. The USDA Forest Service maintains information about the nationwide spread of the European gypsy moth as well as facts and figures. More locally, the North Carolina Department of Agriculture and Consumer Services, with help from the North Carolina Forest Service, manages an extensive gypsy moth trapping and eradication program.

Emerald ash borer (Agrilus planipennis)
The emerald ash borer (EAB) was first discovered in the U.S. near Detroit, Michigan in 2002 and was found in North Carolina in 2013. This beetle is assumed to have been brought into the U.S. in wood packing material from Asia, the same way it could be moved in firewood.

Since their introduction, the larvae of EAB have been responsible for killing "tens of millions" of ash trees in many central and eastern states. The management of this insect has cost landowners, nurseries, and cities millions of dollars. In many of the infested areas, firewood movement regulations have been put into place to help stop the spread of this insect. 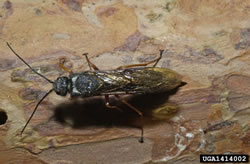 Sirex woodwasp (Sirex noctilio)
The Sirex woodwasp has the potential to be devastating to the pine trees of North Carolina. This insect was detected in wood packing material in New York initially and has since been found in Pennsylvania, Vermont, Michigan, and Ontario. This insect is currently under the jurisdiction of the USDA Animal and Plant Health Inspection Service (APHIS).

This pest was unintentionally introduced into Australia and several South American countries where is has caused as much as 80% mortality in pine plantations. A large number of the pine species planted in plantations in these parts of the world come from the U.S. The susceptible species include some that are very important to the forest industry in North Carolina and the South, including loblolly pine, shortleaf pine, and slash pine. The Sirex woodwasp is not currently known to exist in North Carolina. 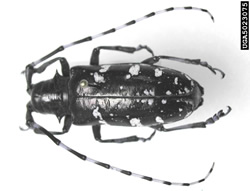 Asian longhorned beetle (Anoplophora glabripennis)
The Asian longhorned beetle (ALB) is thought to have been introduced into the U.S. in wood packing material from China. This beetle is a hardwood pest in China and appears to prefer maple species, birches, elms, horsechestnuts, and willows in the U.S., though there may be other hosts. ALB attacks lead to the eventual death of the host tree.

Since it's first U.S. discovery in 1996 in New York, the ALB has been found in New Jersey, Illinois, and most recently, Massachusetts. The Asian longhorned beetle is not currently known to exist in North Carolina.

Redbay ambrosia beetle/Laurel wilt disease (Xyleborus glabratus/Raffaelea lauricola)
In early 2011, laurel wilt disease was confirmed in several southeastern North Carolina counties. The redbay ambrosia beetle, which carries the laurel wilt fungus from tree to tree, is currently found in several southern states. This beetle is thought to have been introduced into the U.S. in wood packing material and can easily be moved to new locations in infested redbay or sassafras wood.

The beetle only attacks trees within the Lauraceae family. The disease is devastating to redbay trees, and can also attack and kill sassafras, spicebush, pondspice, and pondberry. Pondberry is a federally listed endangered species and pondspice is a species of concern. Avocado is also susceptible. Mountain-laurel, rhododendron, loblolly bay, and sweetbay (magnolia) are not susceptible to this disease.

Residents who suspect they have laurel wilt on their property are encouraged to call their local N.C. Forest Service office for confirmation and management recommendations. 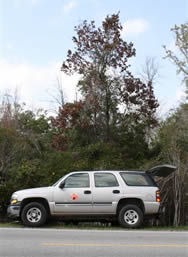 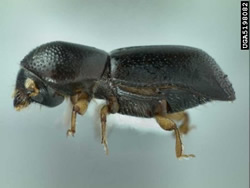 Walnut twig beetle/Thousand cankers disease(Pityophthorus juglandis/Geosmithia spp.))
Thousand cankers disease poses a serious threat to walnut trees in the eastern Unites States and was confirmed to have a presence in Haywood County in late 2012. It is not known to exist elsewhere in the state. The disease is spread by the walnut twig beetle, which is native to Arizona, California, and New Mexico, and generally kills the host tree within 3 years of the initial appearance of symptoms. Eastern black walnut (Juglans nigra), which is native across most of North Carolina, is known to be susceptible to this disease. 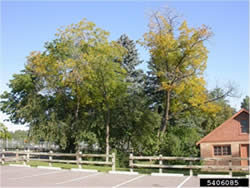 Common pine shoot beetle (Tomicus piniperda)
Common pine shoot beetle, a native of Europe, was first identified in the United States in Cleveland, Ohio in 1992 and is thought to have entered the U.S. in wood packing material. Since its initial introduction, this pest has spread across the Lake States and much of New England. This pest feeds primarily on the new shoots of pine trees, but can also feed under the bark on the trunk of the trees. The damage is typically stunted tree growth, but when beetle populations are high, severe decline and some tree mortality are possible. This beetle prefers Scotch pine (Pinus sylvestris), which is widely planted across the country, but also feeds on most other species of pines. Common pine shoot beetle is not known to exist in North Carolina. 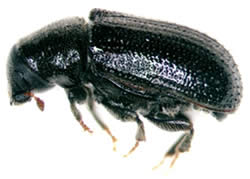 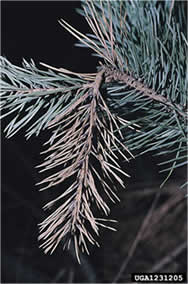